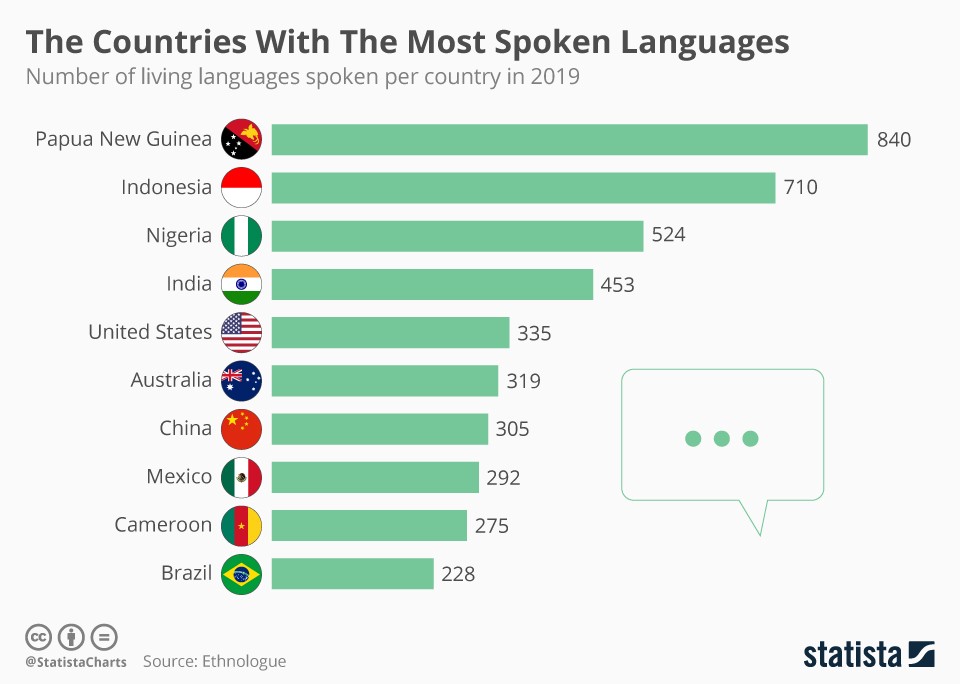 WHICH COUNTRY HAS THE MOST LANGUAGES IN THE WORLD?

You already know that there are a number of languages in the world. Whenever you travel to another country, walk into the super market, or turn on your TV, you hear people speaking in their native tongue.

Depending on the area you live, there can be a Hispanic population. If you are residing near China town, people speak Mandarin or Cantonese on the streets. Within a country, there are many languages spoken. Even only in the U.S. 350 languages are spoken.

Now, this is the place you can never think of. It has almost 820 languages. This figure is almost 12% of all the languages in the world.

820 Languages all over the World

Out of 820 languages of Guinea, there are 3 of them which are official, Tok Pisin, English, and Hiri Motu. The country is situated to North East of Australia. In fact, this is the 54th largest country in the world. It is also among the largest islands in the world. Papua New Guinea is spread over 600 islands. There is less ability to travel from one to another which is the reason behind so many languages. With the usage of such a huge number of languages, these are difficult to understand. So people need to get translations of these languages. They may need them in the form of Finance Translation, Certificates Translation, Engineering or Construction Translation, Telecom Translations, and much more.

Based on its equatorial location, the country has a tropical climate. As some parts of the Australia display 4 marked seasons per year, the seasons of Papua New Guinea are classified into either wet or dry.

Despite pleasant climes, Papua New Guinea is one of the equatorial regions which get snowfall.

The population of nearly 6.2 million people uses not less than 820 languages. There are a few roads in the country, so air transport is preferred. As traveling is the necessity of the citizens, population of some languages begins to fade, so the number of languages will decline. The indigenous people of the country practice cannibalism and hang the victim’s heads as decoration in their houses.

What About the Other World?

Indonesia has an astounding number of 742 languages which are recorded at last count. The country has only one official language. India, USA, and Nigeria follow next. Surprising is that most of the people think of Europe as the country of diverse languages.

That may be true because whenever you break European breakdown, there are a few which are spoken inside. In fact, not a single European country can make its position in the top 20 countries having the maximum languages in the world.

More languages are spoken in Canada, Australia, Philippines, and Brazil than any of the European countries.

What Languages are Spoken in Papua New Guinea?

There are three official languages. Tok Pisin is, strangely enough, a lot of English, and is not easy to understand. The languages I used in Parliament and commerce and is mainly for Western, Central, Oro, and Milne Bay Province. The Suki is spoken by almost 3500 people, especially in the southwestern corner and some villages of Ewe, Guwaku, Duru, and Iwewi.